Richard Reoch was a member of the International Secretariat of the Nobel Peace Prize winning organization Amnesty International for 23 years. When he started, the campaign’s supporters numbered in the tens of thousands, mainly in Europe. Now it is a global movement of more than seven million people, campaigning worldwide for the universal protection of human rights. 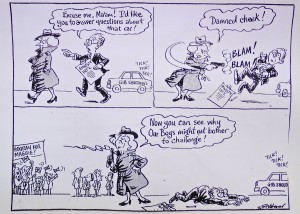 As the organization’s global media chief, Reoch was often on the frontline in controversies where Amnesty International was outspoken. In 1988, when Amnesty called for an independent inquiry into the shooting of three Irish Republican Army (IRA) members in Gibraltar, The Guardian cartoonist pictured him being personally shot dead by Prime Minister Margaret Thatcher.

Beginning as a volunteer in 1971 in the library at the International Secretariat of Amnesty International in London, Reoch joined the staff in 1972 as research assistant to the organizations first Report on Torture and attended the 1973 Conference for the Abolition of Torture in Paris.

In 1974, at the request of the Indian Section of Amnesty International, he initiated the organization’s Asian development program. He was conference organizer for the South Asia Regional Conference of Amnesty International in New Delhi, 1975, and the First Pacific Regional Conference in Gotemba, Japan 1976. He established the South Asia Publications Service in Colombo, Sri Lanka, was its international manager from from 1975 to 1989, and supervised the subsequent creation of the Asia Distribution Service in Hong Kong in 1989.

In 1978 he was appointed Amnesty International’s Press Officer, and in 1980 Head of Press and Publications with responsibility for the organizations’s global public information: representing the organization to the news media; directing offices in London, Colombo, Hong Kong, Madrid, Paris, San José and translation units and press officers in some 50 countries– a position he held for 13 years until 1993. He then coordinated the organization’s representations to the United Nations 1993 World Conference on Human Rights in Vienna that led to the creation of the position of UN High Commissioner for Human Rights.

He features in this BBC film, ‘Amnesty! When They Are All Free’, made in 2011 for the 50th anniversary of the founding of Amnesty International:

Organization for Security and Cooperation in Europe

In March 1998, Reoch participated as Media Expert on the Election Observation Mission for the Extraordinary Presidential Election in Armenia, organized by the 55-nation Organization for Security and Cooperation in Europe, Office for Democratic Institutions and Human Rights (ODIHR). Following this, he was asked, in 1999, to edit “Preventing Torture”, the Official Handbook for OSCE Field Staff.

Other human rights projects and positions

Between 1993 and 2003, he took part in a range of initiatives for the protection of human rights internationally. He was the Representative of the Medical Foundation for the Care of Victims of Torture (now Freedom from Torture) on the Indo-British Project for the Prevention of Torture of the Indian National Human Rights Commission and the British Council (2002-2003).

In 2001, he facilitated the Strategic Planning Review of The Irish Council for Civil Liberties, Dublin, Republic of Ireland, and from 1999 to 2009 he was the facilitator for the Planning Consultations of the Committee on the Administration of Justice, the principal human rights NGO in Northern Ireland.

In 1998 he served as the independent human rights expert attached to the UK government’s Department for International Development evaluation of the International Committee of the Red Cross and United Nations High Commissioner for Refugees activity in the conflict zones in Sri Lanka.

In 1997, he was the evaluator for The Westminster Foundation of Article 19 research and report on Freedom of Expression and the Media in Belarus, which investigated the role of the media in national elections and the constitutional referendum.

In 1996, he was the facilitator for the “Regional Workshop: Women’s Rights are Human Rights”, the Asian Forum for Human Rights and Development, Thailand. In 1995, he was the facilitator for the Consultation on Human Rights Strategies for Sri Lanka, convened by NOVIB, The Netherlands, in conjunction with the Civil Rights Movement of Sri Lanka, Inform, Law and Society Trust, Movement for Development and Democratic Rights and Movement for Interracial Justice and Equality.

In 1993, he was the Human Rights Coordinator for the Inter Press Service Third World News Agency, Rome, responsible for advising on and coordinating editorial planning for IPS participation in the United Nations World Conference on Human Rights.