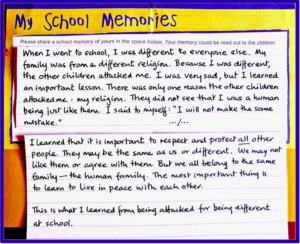 I sent this hand-written message to children in the Rohingya refugee camps on the Myanmar/Bangladesh border where the UN Refugee Agency is hard at work building makeshift schools out of local bamboo. More than half of the 742,000 people who fled there for their lives from what they call “Buddhist Terror” are of school age and in urgent need of education and support.

It is a grim irony that it was precisely for being a little Buddhist myself, that I faced taunts and harassment in the primary school I attended.

Many fear that this unresolved crisis is a “time-bomb” for devastating future conflict. The young people in the camps, many of them severely traumatised, have witnessed unspeakable horrors.  The possibility of future revenge was very much in my mind when I wrote to them about the need to respect and protect our human family.

There are  Voices of Courage speaking out against the brutal suppression of the Rohingya people in Myanmar — and asking us to help the hundreds of thousands of victims of this humanitarian catastrophe, now under international investigation for genocide.

When I was in the border camps with the survivors of these “killing fields”, the desperate people I met there called this nightmare the “Buddhist Terror.”

I tried to put what I witnessed into words:  Meditating on the Buddha in the Midst of Buddhist Terror .  It has since been published by Lion’s Roar, one of the Buddhist world’s most widely read online journals.

These people’s villages were set on fire. They were shot as they fled. The soldiers threw their babies into the flames. The medical workers in the refugee camps are treating hundreds of women who have been raped and horrifically scarred by sexual cruelty.

Hearing their testimony was so unbearable to me as a Buddhist, my hands were trembling as I tried to hold my camera.

These people want the world to hear their story.

This time there is something we can do

We Buddhists have a special responsibility. We need to raise our voices against these atrocities, and make clear this violence is not being done in our name.  We need to do whatever we can to help the victims.

So often when we see devastating news reports, we have no idea how to help. Our sense of helpless makes the compassionate pain we feel all the more intense. This time, however, there is something we can do.

END_OF_DOCUMENT_TOKEN_TO_BE_REPLACED

Recently, in talks I have been giving, I have asked people  what they think an enlightened society would be like. Here are the students at Al Akhawayn University in Morocco  offering their thoughts.