After suffering a slipped disc at the age of 35, Reoch took up the practice of Tai Chi Chuan, first in an adult education class in London and then directly under Master Lam Kam Chuen. Master Lam, born in Hong Kong shortly after the Second World War, had moved to London in 1975 and began teaching in the Inner London Education Authority, becoming the first Tai Chi Chuan instructor officially recognized in the UK. 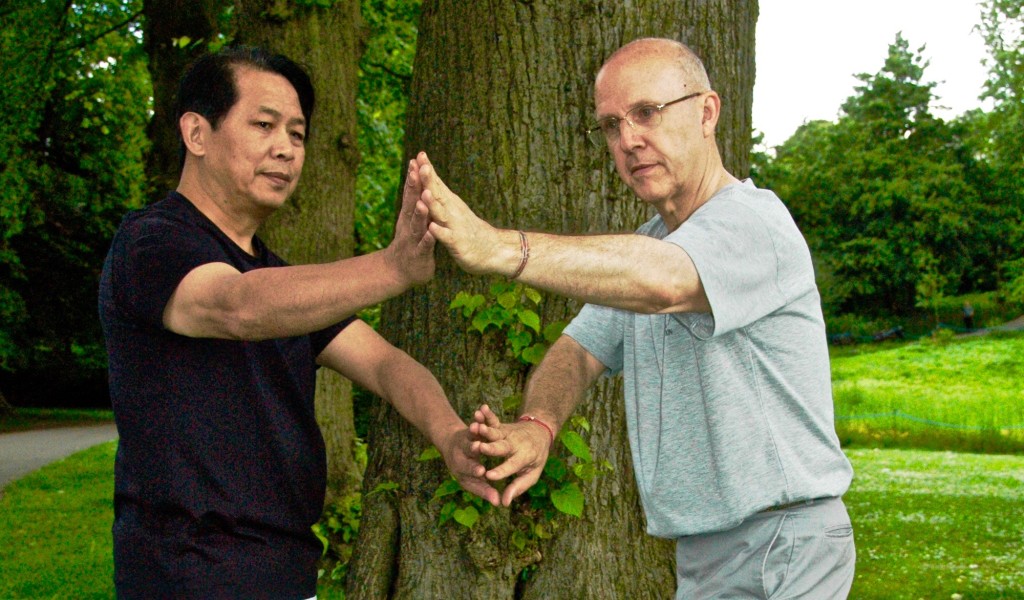 Master Lam Kam Chuen with Reoch at a photo-shoot for one of Master Lam’s many books on classical Chinese health care and culture.

After five years’ study, Reoch was authorized as a teacher by The Lam Association and began teaching evening classes at Islington Federal College, under the Islington Adult Education Authority, London (1990-1999), and classes at the Royal College of Nursing (1991- 1993), the European School of Osteopathy, Maidstone, Kent, (1992 – 1995), and the Sharp End and Hoxton Health Group, City and East London Family and Community Health Services (1996 – 2001).

In 1996, Master Lam introduced the art of Zhan Zhuang Chi Kung (Standing Like a Tree) in Europe and the western world, having received authorization to do so from his own master, Professor Yu Yong Nian. Reoch took up the practice, and assisted Master Lam in producing a series of books and videos on these classical arts.

Zhan Zhuang Chi Kung is the foundation of the martial art known as “The Great Accomplishment”, first taught publicly in China by Great Grand Master Wang Xhiang Zhai. Professor Yu and Master Lam continued that tradition. In 2014 an international gathering of practitioners of The Great Accomplishment attended the unveiling of a memorial to Grandmaster Yu in the Myriad Buddha Cemetery in Beijing, China. This video includes extracts from that event and the history of the art.

In 1996 the publisher of Gaia Books, the UK publisher of all Master Lam’s works, asked Reoch to compile an anthology of complementary care that would benefit people with terminal illnesses and their carers. The result was Dying Well: A holistic guide for the dying and their carers with a foreword by Yehudi Menuhin (see below).

As a result of his interest in Chinese health care, Reoch decided to study the system of energetic medicine, known as Shiatsu, and in 1992 qualified for a Professional Diploma in Shiatsu and Traditional Oriental Medicine from The Shiatsu College, London and became a member of the UK Register of Shiatsu Practitioners. From 1994 to 1996 he was the Shiatsu Practitioner, for the Hoxton Health Group, City and East London Family and Community Health Services.

Master Lam has introduced us to this very helpful system of hand massage. It benefits our entire system since all the inner energy pathways of our body (the meridians) are present in our hands and fingers and run all the way through to our finger tips.